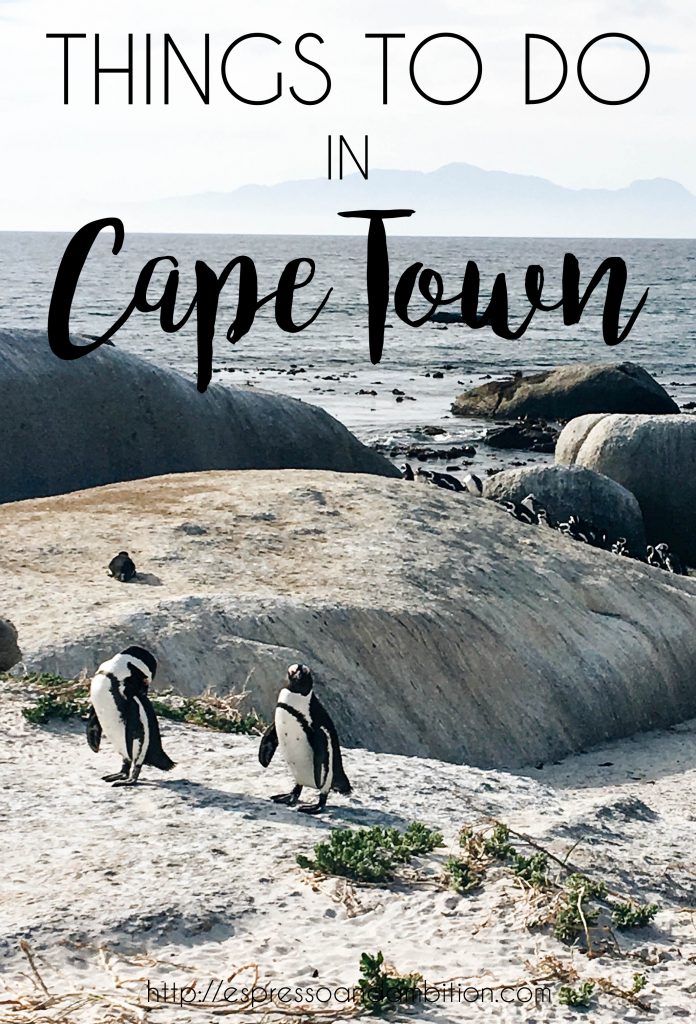 Of all the places I visited in South Africa, Cape Town is probably the one I’m most familiar with. If you’ve been watching the travel vlogs I’ve been putting up on my YouTube channel (weeks 1, 2, and 3 are already up), you’ll know that I’ve spent most of my weekends there. There’s really no shortage of fun things to do there. Most of it is pretty outdoorsy, but that’s because Cape Town is absolutely gorgeous. If you’re headed there soon (or even somewhat thinking about it), I hope this post helps you get an idea of what you want to do while you’re there!

This is the iconic Cape Town thing. It’s this huge mountain right next to the city, so you can walk around and get 360-degree views of the city. I’m sure it’s possible to hike the mountain, but we got up there using the cable cars (which also give you amazing views). 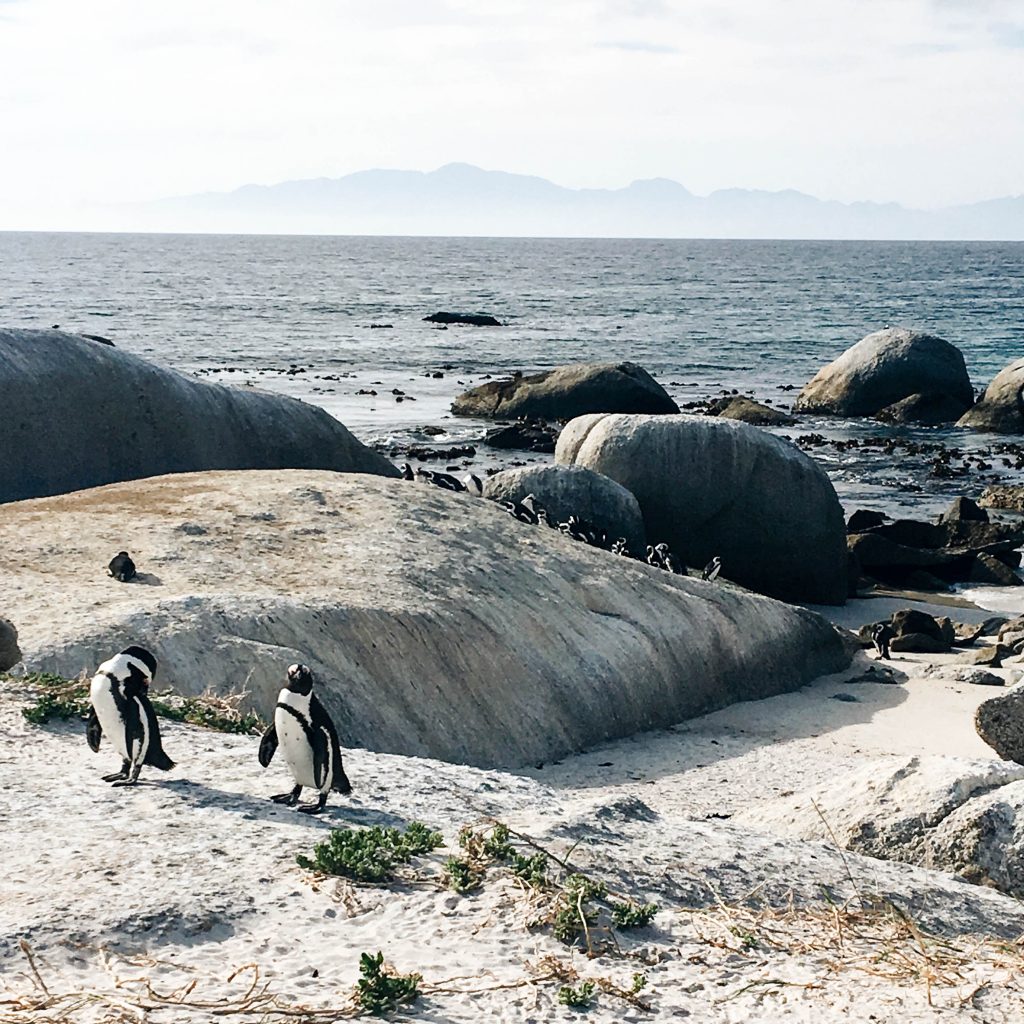 If you’ve ever dreamed of seeing a whole squat of penguins in one place but don’t want to go all the way to Antarctica, this is the place to go. The beach is absolutely covered in penguins, and they’re so fun to watch. Don’t get too close though, they actually bite pretty hard. One nibbled my Converse from where I was standing on the bridge and it was aggressive. 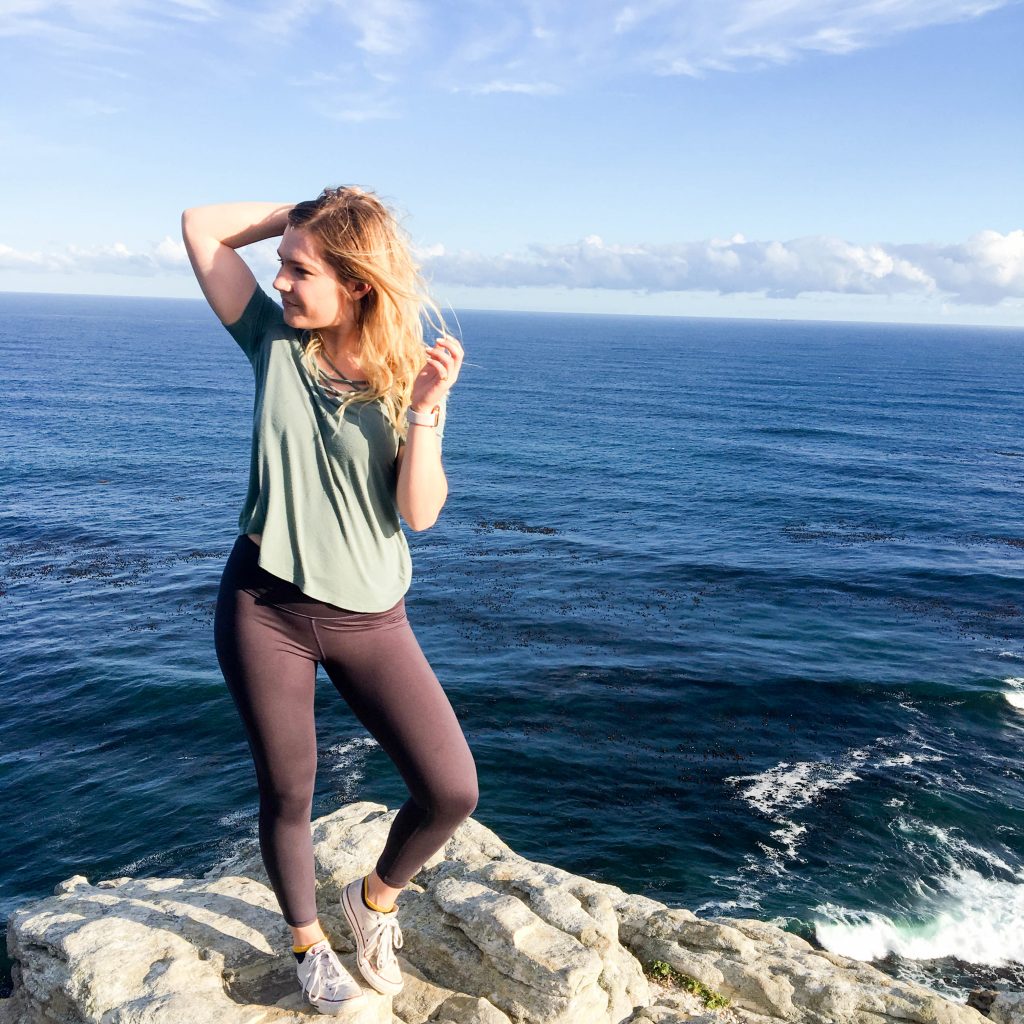 The most southwestern point of Africa is a must-see if you’re in the Cape Town area. For one, it’s just cool to say that you’ve been to the most southwestern point of the continent, but the most important thing is that it’s absolutely breathtakingly beautiful. You’ve got the oceans on one side and mountains on the other, and it’s truly a sight to see.

If toasting champagne in the middle of the ocean while the sun sets sounds like your cup of tea, this is the activity for you. (And if it doesn’t, who even are you?) It’s a pretty inexpensive venture, all things considered, and it’s a really pretty way to watch the sun go down over the ocean.

Confession time: I didn’t actually do this one. But I really wish I did. A friend of mine who came to Cape Town last year did it, and said she got some of the prettiest views of Cape Town while paragliding. Since I missed it this time around, looks like I have an excuse to come back sometime in the future! 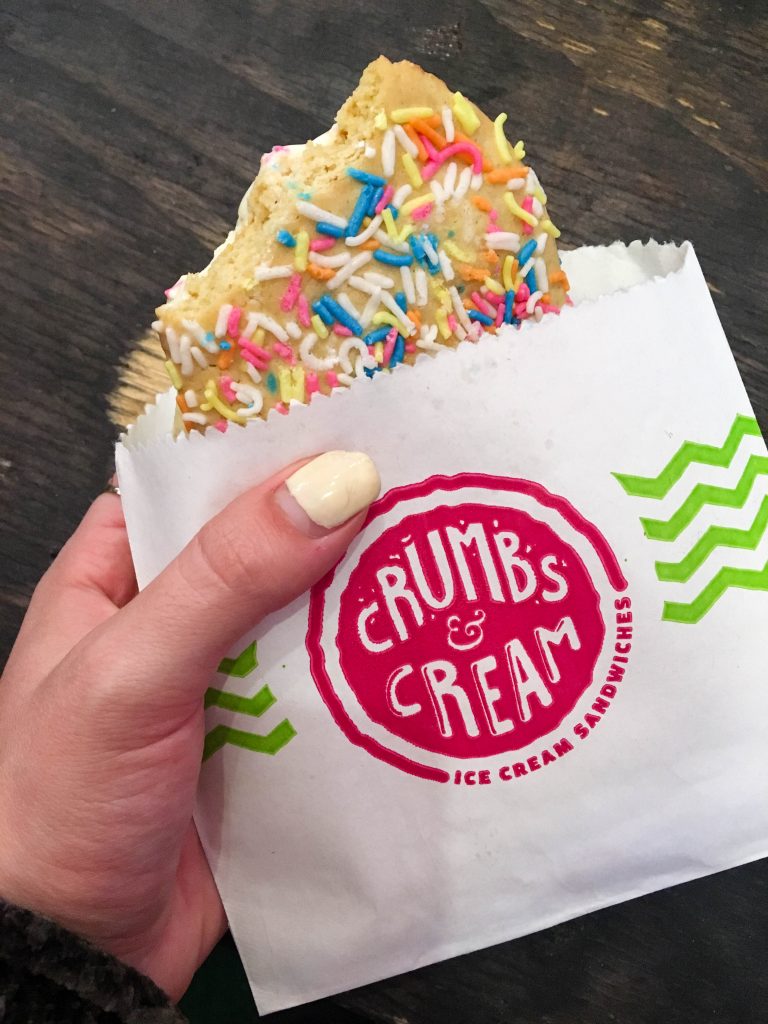 If you’re in pursuit of some more ~trendy~ things to do in Cape Town, this market is the definition of trendy. They’ve got a massive food hall with everything from waffles to dim sum to sangria, and a whole host of market stalls selling jewelry, clothes, and accessories. One of my favorite purchases from my time in South Africa is the ring I got from this market; it’s shaped like the skyline of Table Mountain and Lion’s Head. 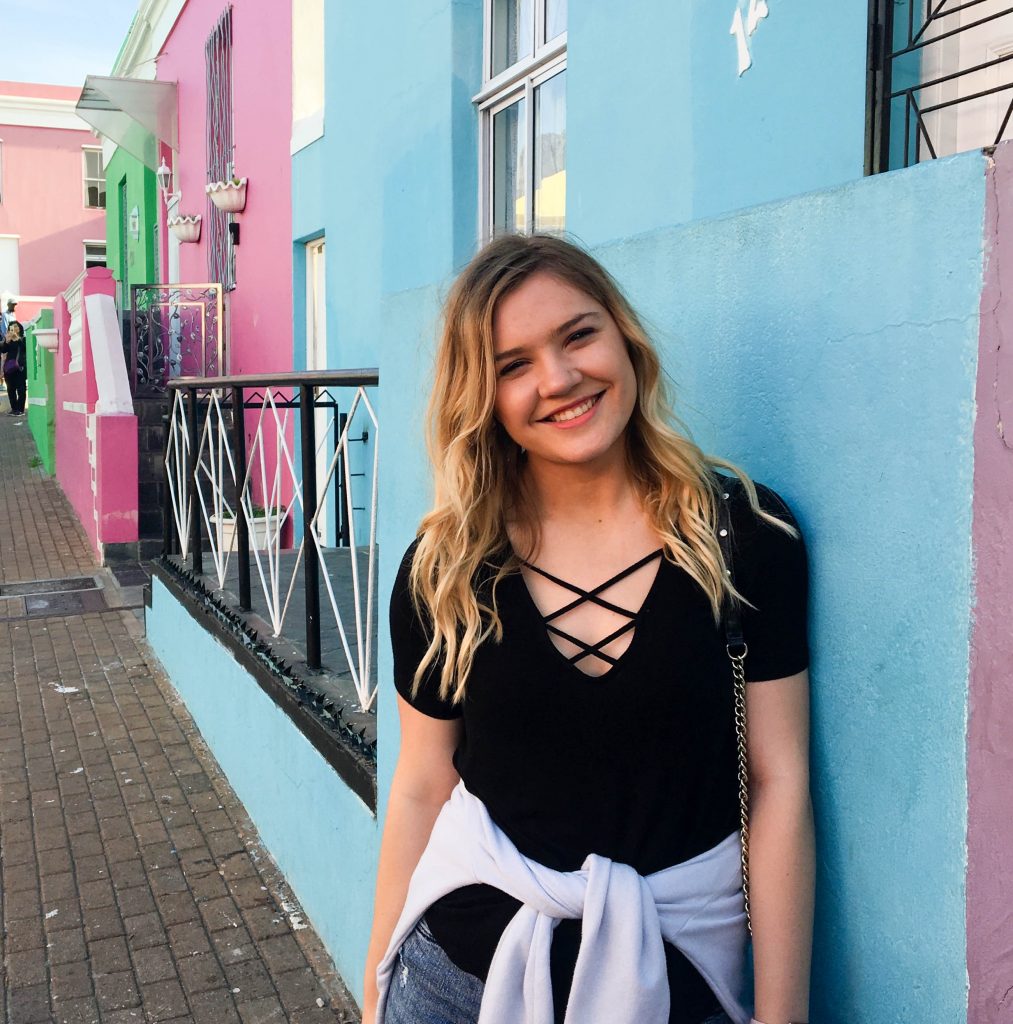 This Cape Town neighborhood is an Instagram-lover’s fantasy. The houses are all painted bright, flashy colors, which makes for really great photos. They’ve also got some cool food places and coffee shops in the area. (I would recommend that you be a bit more cautious of your tourist status in this area though; despite the really pretty colors, these are also people’s homes and you’d probably feel a bit odd about random people walking through your neighborhood for pictures at all hours of the day. Moderation and respect are the names of the game here.)

In addition to the outdoorsy activities and trendy places to visit, Cape Town also has a rich history, and no place shows this better than Robben Island. You can take a ferry out to visit it, and you’ll see the prison that Nelson Mandela and a number of other political prisoners were housed in during the apartheid era. It’s a really interesting way to get an up-close perspective on South Africa’s history. 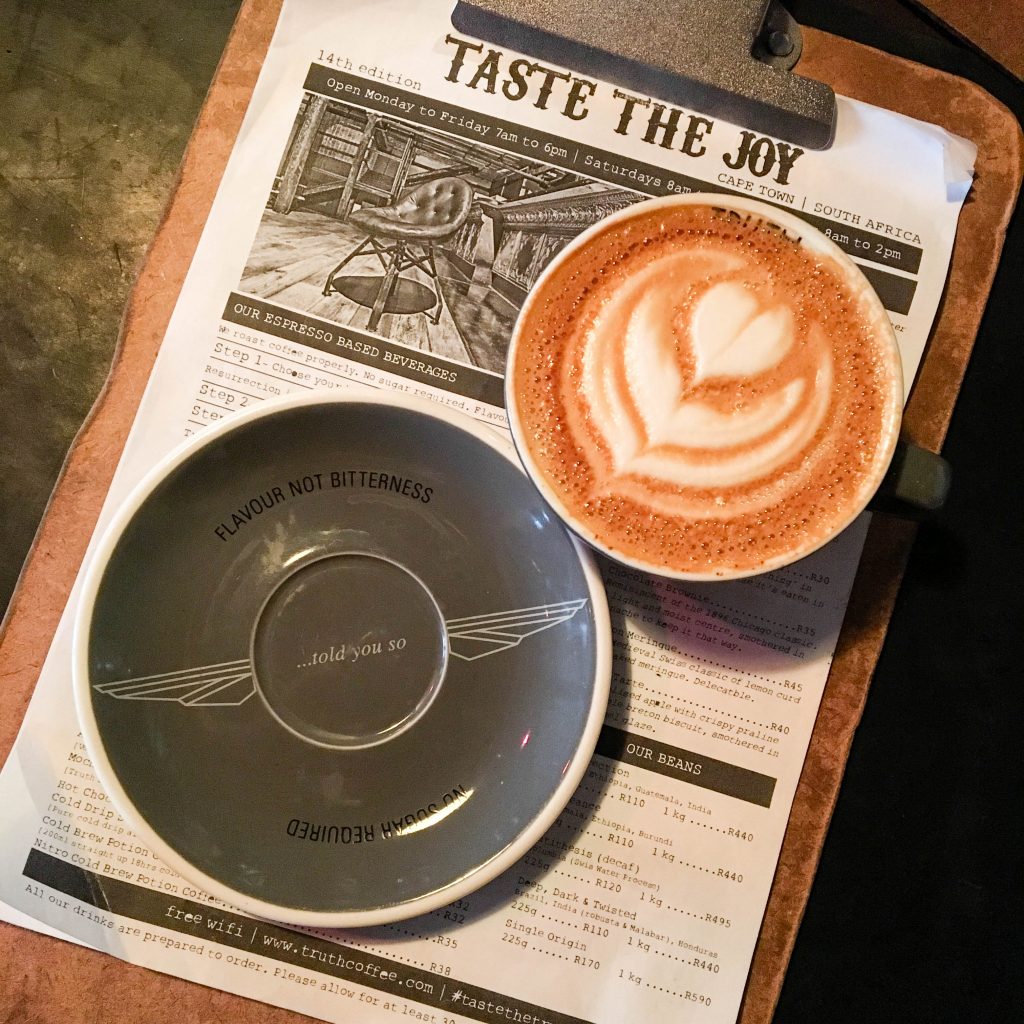 This wouldn’t be Espresso and Ambition if I failed to mention at least one coffee shop in my entire travel post. Truth is probably the most unique coffee shop I’ve ever been to – it’s got very steampunk vibes, both in appearance and in music selection, and their drinks are really something different (even though I ended up being boring and ordering a flat white). If you hit up one coffee place in Cape Town, make it this one.