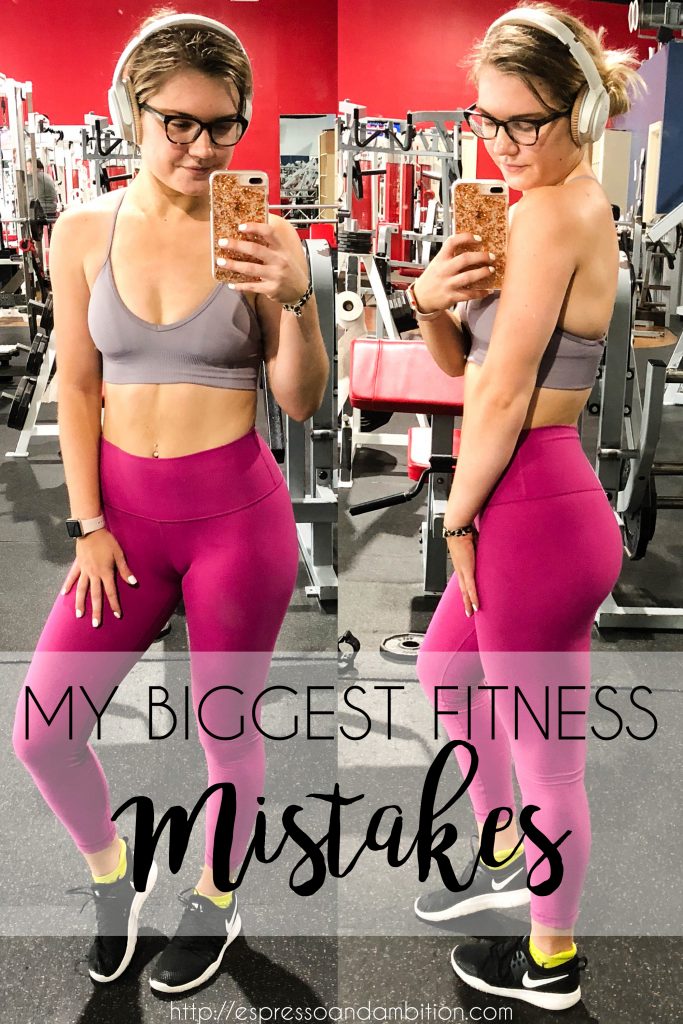 While most of my posts generally seek to provide some sort of advice, this one does not. Instead, we’re getting reeeaaaal personal about mistakes and parts of my fitness journey that were definitely not pushing me in the right direction, for whatever reason. This post exists so that maybe, if you’re someone who struggled with or is struggling with the same sorts of things, you can know you’re not alone.

Obsessing over the scale

Is weight a good way to track progress? Yes, of course. But exclusively using the scale to track progress? Not at all. I’ve gone through periods of my life where that little number on the scale was somehow an indicator of my success, fitness-wise. Never mind if I felt strong or looked leaner, what did that number on the scale say? And of course, that leads to some really negative habits and an obsession with a number instead of, you know, pursuing fitness for what it’s supposed to be good for: being healthy and feeling good.

Getting over it: I weigh myself once a week now, if that, and I try to keep it in perspective with other things, like body fat percentage, progress pics, and overall feelings.

When I first starting “dieting,” I truly thought the key to losing weight was being on the biggest calorie deficit possible without, you know, starving yourself. Seriously, I’m pretty sure I was on a 1,200-calorie diet for a while. And that’s a) not healthy in general, and b) probably caused me to lose more muscle than fat anyways, because super-low-cal diets like that can put your body into starvation mode. Which is less than ideal for weight loss.

Getting over it: Accepting that losing weight should be a slower process, if you’re going to do it right. A 500-calorie deficit is ideal, not a 1,000-calorie one, if the goal is to lose fat without losing muscle too.

Only doing one type of workout

I’ve always been a one-type-of-workout gal, and honestly, I don’t even know why. Variety is fun! Not only that, but it’s something your body really needs. I’ve been mixing more cardio into my weekly workout splits instead of doing exclusively weight training, and I’ve seen improvements in both areas as a result.

Getting over it: Cardio, balance, flexibility, and resistance training all play important roles in keeping your body in peak form, so don’t be afraid to make your weekly workouts a bit more ~varied~!

Punishing myself for getting off track

This is probably my least healthy “healthy” habit. And honestly, I still struggle with it to this day. There’s some part of me that always wants to compensate for getting off track – whether it be going way over a calorie goal for the day or missing a workout – by swinging to the other extreme. Went 800 calories over yesterday? Looks like I’m only eating carrots today! Missed a workout? Alright, let’s do one today that’s twice as long! And that’s just… no. For a number of reasons. First of all, that’s terrible for your body to restrict it so harshly. And second of all, being healthy should never be a punishment. As I’ve grown to have a healthier appreciation of why I like staying in shape, I’ve started to understand that fitness is worthless if you’re not happy about it. Being in peak shape doesn’t matter if you’re miserable. Being healthy is something you should do because you want to, and because you like how it makes you feel, rather than something you feel like you’re forcing yourself to do.

Getting over it: As mentioned before, I still struggle with this one sometimes. The best thing I’ve found is to remind myself that this is a long-term deal, not an 8-week crash diet. One unhealthy meal won’t derail an entire life’s worth of work.

And there you have it – my biggest fitness struggles and mistakes laid out in a post. On a more optimistic note, here’s to consistently fighting those negative voices. Keep on keeping on.